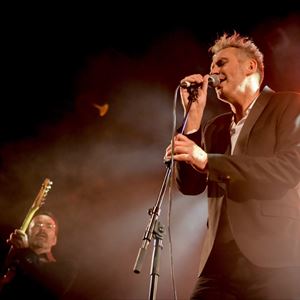 All Hipsway performances
Have tickets to sell? – Find out more

Over 18's Only.  This is a standing only concert.  The balcony may open if sales dictate.

Four young pretenders from Scotland staked their claim to the crown with their debut album, Hipsway, an intoxicating blend of pop/rock and soul, still sounding fresh today.

Featuring four singles: Broken Years, Ask the Lord, Long White Car and Honeythief, the album quickly achieved UK gold-album status with sales of 100,000+. The band performed on Top Of The Pops as Honeythief entered the top 20 both in the UK and later the Billboard Hot 100 singles chart.

In support of the album, the band supported Eurythmics on the European leg of their world tour (250,000+ people over 30 dates) plus their own headline club tour of America in 1987. Appearances were also made alongside fellow Glaswegians Simple Minds at four stadium concerts in the UK and France.

The remaining three members moved to New York to write and record the second album, Scratch the Surface, at the legendary Atlantic Studios. These sessions represented an attempt to grow as artists and featured many top session musicians including Jocelyn Brown, John Sebastian, the Brecker Brothers and the Institutional Radio Gospel Choir.

While the band members were happy with the recordings their UK label, Phonogram, grew distant from the project due to A&R politics and the ensuing friction caused the band to split before the official release of the album. Skin (vocals) and Pim (guitar) then formed a new project, Witness, on A&M, but that’s another story.

After several more years treading the boards, Skin and Pim called it a day, remaining friends as they pursued separate projects.

Despite many requests to reform the band over the years, Skin never took them seriously until, 30 years after the debut release, he was asked about the possibility of a deluxe album reissue.

After release on Cherry Red in November 2016, it seemed like the perfect opportunity to reunite with Pim and give the audience what they wanted.

Tickets on sale for a show at Glasgow’s ABC sold out in a day, prompting another show which also sold out immediately. The performances were a great success with many audience members remarking it was their favourite gig of the year.

With another sold-out show at Kelvingrove Bandstand in August, a show in Islington Assembly Rooms, London and more planned for December, Hipsway’s enduring popularity has invigorated the band to write and record new material for potential release in 2018.

The band has continued to go from strength to strength with the most recent run of shows supporting their first album in 30 years, S M O K E & D R E A M S, culminating in a sell-out at the legendary Barrowlands Ballroom in Glasgow.