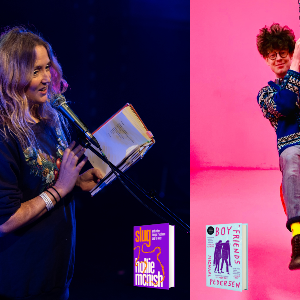 Hollie McNish is a Sunday Times bestelling author and poet whose live readings are not to be missed. Expect strong language and adult content ribbon wrapped in carefully and caringly sculpted poetry from her latest collection Slug and more.

Here, she will be joined by fellow poet Michael Pedersen, reading from Boy Friends, his poetic memoir about friendship which Stephen Fry has declared 'enchanting...astonishingly compelling...rare and to be treasured'.

“One of the best poets we have” – Matt Haig

“Utterly fearless: an essential voice for our times - Musa Okwonga

'A master of words. He plays them like music.'?—Kae Tempest?

Hollie McNish is a Sunday Times bestselling author based between Cambridge and Glasgow. She won the Ted Hughes Award for New Work in Poetry for her poetic parenting memoir – Nobody Told Me -
of which The Scotsman stated ‘The World Needs this Book’. She has published four further collections of poetry – Papers, Cherry Pie, Plum and her most recent poetic memoir Slug...and other things I’ve been told to hate, which covers topics from grief to otters, grandmothers to Finnish saunas. She has just completed a re-imagining of Sophocles’ Greek Tragedy Antigone. She really loves plums and writing poems