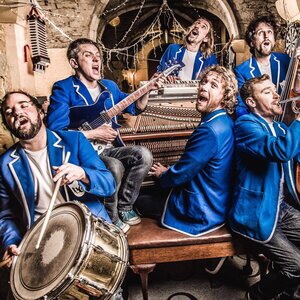 
Hope & Social, eight hoodlums who play all-out, ballsy, joyous and uplifting music to win the hearts of many a gig-goer throughout their ten-year tenure as one of the UK’s hardest working bands. Hope and Social gigs are a bewildering mix of chaos and superlative musicianship, built on some of the finest songs you’ll ever hear, and garnished with generous portion of Northern, self deprecating humour. With a 3 piece horn section and 5 part harmonies, Hope and Social make a massive sound that draws influence from soul, indie, folk, disco and art rock. You’ll sing, you’ll dance, you’ll smile so much your face will hurt.

The last few years have seen the boys in blue tour extensively around the U.K garnering the praise of many a fan, fans-to-be, and critics on the way. From folk clubs in the deepest south of England to the cavernous Leeds Arena. Yorkshire's own 'E-street Band' are no stranger to the Festival circuit, having chalked up an impressive list of appearances including Greenbelt, Glastonbury, Durham Brass, Yorkshire Festival, Moonbeams, Deershed and Just So Festival. In June 2019 the band supported indie-popsters Embrace at their sold-out homecoming show at the Piece Hall, Halifax.

Hope and Social aren’t just about gigs. As part of their mission to involve people in most everything they do, they’ve completed a huge number of ridiculous projects and events involving dozens, hundreds and now thousands of people in what they do. Check out hopeandsocial.com/projects/ for more details.

Gary Stewart
Gary Stewart is a Scottish singer/songwriter who has carved out a strong fan-base in his adopted home of Yorkshire withsongs about paranoia, love & prostitution. When not playing his own shows the left-hander plays drums for fellow Bandcampers Hope & Social, runs the Gaslight Club in Leeds and performs up & down the U.K performing Paul Simon's classic album 'Graceland' with his 7-piece band.
https://garystewart.bandcamp.com/