How To Laugh in English - Scott Capurro Stand Up Tickets 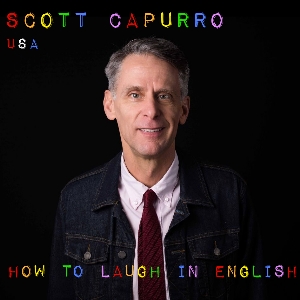 All How To Laugh in English - Scott Capurro Stand Up performances
In order to do that in a responsible way we're asking that everyone that comes brings with them per The Tunnel: A paper that says that they are either vaccinated, tested negative or recovered. For an antigen test, within 48 hours or 72 hours for a pcr-test. (As of June 22nd. This may change as regulations change)
View venue accessibility information for Tunnel Vienna Live, Vienna
Fan-to-Fan Resale Tickets

San Franciscan actor/comedian Scott Capurro has become one of the most popular faces on the UK comedy circuit. At his first appearance in the UK, the 1994 Edinburgh Fringe Festival, Scott hit the ground running by winning both the PERRIER BEST NEWCOMER for his show ‘RiskGay’, along with the SPIRIT OF THE FRINGE award. ‘

Scott Capurro’s Love and Affection Tour’, his 1995 Edinburgh show, was then nominated for the main PERRIER AWARD.

Since then, Scott has extensively toured the US, Australia, South Africa,

Europe and Canada, having performed several times at the JUST FOR

His comedy material is deliberately provocative, referring often to gay life and culture, politics, race and racism, and popular culture.

"I don't give a shit about those who don't like my work," Scott snaps. "I'm never going to win them over anyway, so why bother? My work is for a discerning audience who don't have knee-jerk responses."

So… if you’re not up for a little scandal, you may want to stay home and watch Netflix.