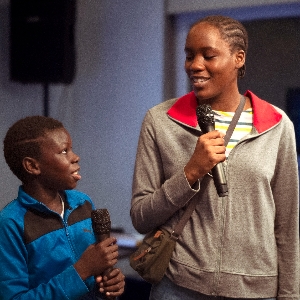 This event is for 15 and over - No refunds will be issued for under 15s.

In modern Belgium, a young boy and an adolescent girl who have travelled alone from Africa pit their invincible friendship against the cruel conditions of their exile. Hoping for a better life in Europe, they instead face impenetrable bureaucracy, corruption, child labour and abuse from those they thought would help them. Anchored by two remarkable, engaging lead performances, the film speaks to important contemporary global themes but never lets politics overwhelm the importance of character and narrative.

"Working in their rigorously lyrical drama-as-documentary style, the Dardennes place the audience on the hamster wheel of Tori and Lokita’s lives, in a way that’s both harrowing and immersive." Owen Gleiberman, Variety

"Not only would you believe that Tori and Lokita are related, but the bond they share is so vivid and alive that you’d believe the actors playing them were, too" David Ehrlich, IndieWire

"Moving, politically committed and with an absolute ring of hard-researched reality, this is at the very least their finest since 2011’s The Kid With The Bike, and arguably one of their very best." Jonathan Romney, Screen Daily

Programme Details
The venue is open all day, so why not come along early to grab a drink and a snack? The programme run time includes an allowance for introductions and up to three trailers. While we will endeavour to accommodate latecomers, this may not always be possible. Please note that we reserve the right to refuse entry, without a refund, to anyone arriving after the advertised start time.

Please note the pedestrian entrance to Princes Quay is either via the Quayside entrance (next to Nandos) or via the footpath from Waterhouse Lane / Bonus Arena. Both entrances off Carr Lane are closed after 6pm. The car park entrance remains unaffected.

Contact Us
If you have any questions or suggestions, please drop us a line at hello@hullindependentcinema.com or on social media.

Ticket Terms and Conditions
If any tickets remain unsold they can be purchased on the door on the night of the screening, but we strongly advise buying in advance. Advance tickets must be purchased; we cannot reserve tickets. Tickets are non-refundable and non-exchangeable. If you purchase a member, student or 25 and under ticket, your membership card, student or personal ID MUST be presented along with your ticket on the door when you come to a film. If you do not have your card or ID we reserve the right to charge the non-discount rate for your ticket.