Hurray For The Riff Raff Tickets 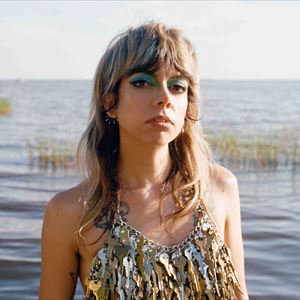 One of the reasons you started listening to music in the first place might have been in the hope of finding the kind of conviction and fierce rawness evident in Hurray for the Riff Raff’s, aka Alynda Segarra’s, “nature punk” manifesto about survival, LIFE ON EARTH. A visionary musician, Segarra (they/she) is an outsider in whose voice you might find echoes of your own. On her eighth full-length album, Segarra is creating music of honesty and portent.

If there hadn’t been a pandemic, Segarra might have made a very different sort of album from Life on Earth, which became the record she’s waited a lifetime to make. Like the rest of us, Segarra had the disconcerting experience of putting the brakes on life as they knew it in March 2020. “I need to keep moving all the time,” says Segarra on a Zoom call from their light-filled studio in the shotgun house they call home in New Orleans’ Seventh Ward.

Segarra had been a human embodiment of Newton’s First Law of Motion even before they ran away from their home in the Bronx at age seventeen, illegally hopping freight trains or hitchhiking across the country in the company of a band of street urchins, sleeping rough under dense underbrush at night and hiding in trees for shelter. Coming from a fractured family, they weren’t quite sure what they were looking for, but they had the feeling they would know it when they found it. And they did when they pulled into New Orleans in 2007. There, Segarra formed two bands: Dead Man’s Street Orchestra and Hurray for the Riff Raff, releasing an EP and seven albums with the latter.

In 2015, Segarra temporarily decamped, first to Nashville, then home to New York. Her 2016 Hurray for the Riff Raff album, The Navigator, was a quest to reclaim her Puerto Rican identity. Each song segued into the next in a tight narrative arc, uncovering important hints through the lens of her ancestors.

“I feel like I’m always leaving clues in my song, hoping my listeners will follow the breadcrumbs,” says Segarra with a short laugh. On Life on Earth, they just might. This time, she’s chosen a topic that affects us all: our relationship to the natural world. “You could call Life on Earth survival music for the end times,” says Segarra. “But not just surviving—learning how to thrive. The importance of adapting and learning from nature—those were the themes that kept coming to me.” They continue, “Not being able to travel and get out whenever I felt nervous energy inside me, it really did a lot to bring back memories. It was a very reflective time, and it taught me a lot about trauma and memories being stored in the body,” says the musician. “I started running because that was the best way I could work out all of these weird feelings that were bubbling up and swirling around inside me.”

While running, Segarra saw a New Orleans that they had never noticed before, coming face-to-face with the unruly plant life. “I felt the nature in New Orleans has this really rebellious energy, because it’s like nothing can get it down,” explains Segarra. “I was thinking of this loneliness, then all of a sudden I was looking at this plant life around me and feeling, ‘Why did I feel so lonely when you’re here?’”

“For me, every album is almost a film or a novel or a world I create that I want to live in. I want it to have themes and language, a cosmology or a lexicon, so the listener can live in it, because that’s what I loved about punk and the music that I was drawn to. It wasn’t just about the music, it was about joining a crew,” says Segarra.