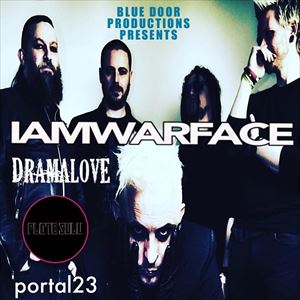 IAMWARFACE are an Electro Rock Band formed in London 2016 by singer/producer Matt Warneford. His band consist of Lou Matthews (Guitars), Tom Howe (DJ Synth), Mike Smith (Bass) and Adam Stanley (Drums). The name is a metaphor for his own original style of bombastic high-energy groove based electro-rock, which has been affectionaly branded “Rocktronica” by none other than legendary Virgin Radio host Eddy Temple Morris.

They have taken the pop route but they keep it dangerous with a fusion of 80’s style vocals, abstract guitars, moody layered synth riffs and pounding drum beats.

The band have been influenced by many peers such as Depeche Mode, Gary Numan, Kasabian, Muse, Big Black Delta, Nero, Queens of the Stone Age, Tears For Fears, Yeah Yeah Yeahs, Black Keys and MGMT.

They have so far released a number of singles which have been met with high acclaim by both public and industry peers. In fact, Eddy TM has stated that their upcoming single “Closer” is the best thing they have ever done and has already been tipped to be THE track of 2018.

With exclusive live sessions on BBC Introducing propelling them to even greater heights, 2018 has been earmarked as the year they break out.

They have just finished touring sold out support gigs with Gary Numan (including Leamington Assembly capacity 1500) where they proved so popular to the Numanoids, calling them: “The best Numan support act in fifteen years”. Not ordinarily a fan-base who are easily swayed – they’re now actively supporting Iamwarface online, at gigs, buying their music and following them in droves!
http://www.iamwarface.com

Dramalove
As heard on the BBC Introducing frequencies with the single “Lady Macbeth”, the Brighton exuberant alt-rock three piece Dramalove mix guitar based rock with electronic angularity and darkly poetic lyricisms. They’ve recently been included in the “Best New Bands” compilation on Classic Rock Magazine, after having relocated in the U.K. and quickly gained a dedicated following thanks to their frantic and brief shows and after reaching the MTV charts and finals on the Italian X-Factor.
It’s a three piece sounding like a big wall of sound. “Like listening to early Muse, perhaps with more energy” - Lisa Higgins, The Guardian. They’ll be recording their first album in France with Grammy awarded producer James Sanger (Keane, Dido, Madonna, Manic Street Preachers), on January 2020.
Busy Saving The World - https://youtu.be/Scl0E5NEiBo
Spotify - https://spoti.fi/2XqFOe9
https://www.facebook.com/dramalove/

FLOTE SULU
The band was formed by our Guitarist/Singer Hayden who had accumulated a sizeable portfolio of ideas, written a few songs and recorded home demos in early 2019. Throughout the months that have followed, our Bassist Ben and our Drummer Jon have joined, and Flote Sulu are rapidly gaining momentum.

In the past three months in particular, we have; performed extensively in popular music venues, recorded a single, gained positive reviews.
Described as “…Hypnotic, stoner infuenced Post-Rock…”
https://www.facebook.com/flotesulu/