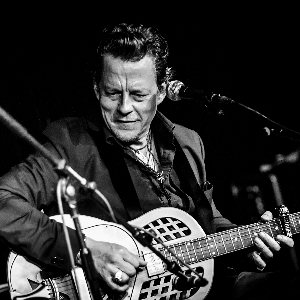 Classic Rock tags Ian Siegal as “a national treasure”, so very fitting that he is appearing at the Eel Pie Club at the start of the Queen’s Platinum Jubilee Bank Holiday Weekend.

Other accolades include America’s blues bible saying “vast talent” and MOJO magazine ranking him “the cleverest writer and most magnetic blues performer in the UK.” He has taken his music to some 50 countries and awards include two UK Blues Awards, 13 British Blues Awards, 4 European Blues Awards, 3 Mojo Blues Albums Of The Year not to mention 3 US Blues Music Awards nominations.

Ian Siegal’s mission statement is: songs that are real, shows that resonate, vocals served raw. Today he is considered by many to be the most compelling British blues artiste since the great names of the sixties.  His forte is playing to an audience. He takes command of the stage in a way very few artists alive today can match. Sweat, passion, humour, incendiary slide guitar and a soul-infused voice.  Ian has just released a new studio album, Stone by Stone, to great critical acclaim.