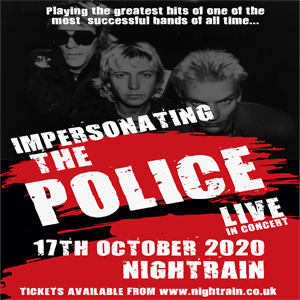 All Impersonating The Police performances
Have tickets to sell? – Find out more

Guilty as charged, "Impersonating The Police" are the UK's finest tribute to The Police. Formed in 2018, they bring together over 75 years worth of touring, music production, and recording experience together to produce a show that captures the music and energy of a live performance of The Police at their prime. Drawing on live and studio recordings, the band play over 90 minutes of The Police greatest hits with the odd rare track thrown in to both surprise and delight fans of The Police, both old and new. Playing hits such as Roxanne, Message in a Bottle, Every Breath You Take, Every Little Thing She Does Is Magic and many more.