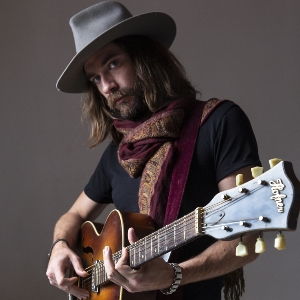 On each album, Jack Broadbent is used to people saying, “Oh, this is a departure from your

previous stuff.” That’s something the British-born singer, songwriter and guitarist has heard

to varying degrees, over the course of his six albums to date, and is certainly fitting of his

latest release, RIDE. As someone who is as connected to the quality of his relationships with

people as he is to the quality of his music, rest assured he considers that a compliment.

“I think there’s a lot of variety on my records. This is no different,” Broadbent says. “I’m really

Broadbent grew up in rural Lincolnshire, England. His earliest influence, his father, Mick

Broadbent, plays bass on RIDE and is a well-established musician, including a tenure with

Bram Tchaikovsky. “I fell in love with music at a young age,” he says, informed by the steady

diet of music played around the house. His father would take Broadbent to open mic nights

as a youth, and by his early teens he was playing drums in his dad’s bands. Broadbent

gravitated to guitar around the same time as he became interested in song writing.

“Being a drummer, I tried to develop a very rhythmic approach to my guitar playing,”

Broadbent recalls. “What interested me was being able to hold down a groove and do some

Broadbent’s slide guitar playing evolved from the busking he did during his early 20s. “It

seemed to appeal to people as something that was both visually and musically exciting. This

was interesting to me,” Broadbent explains. “I was already playing in altered and open

tunings, so when it came to using a slide I was well-versed in how those patterns worked

together.” He took some cues from influences such as John Lee Hooker and Little Feat, but

ultimately Broadbent says, “I never really wanted to emulate anybody else’s style, which is

why I ended up going down a slightly more hard-hitting, brash, kind of route in my playing.”

Broadbent found acclaim and an audience after the Montreux Jazz Festival hailed him as, “The

He won over more fans touring with the likes of Ronnie Wood, Peter Frampton, and other

whenever Broadbent was ready to return to the studio. That was the case with RIDE, although

the album took a turn from what Broadbent initially intended.

acoustic material,” he recalls. Instead, with Quebecois drummer and co-producer Mark

Gibson, “…we started playing some of the more rock ‘n’ roll stuff I had, and we couldn’t deny

that there was a kind of vibe happening. So, I just went full steam ahead in that direction

which brought the sound of this album into focus. We built on those grooves and ended up

with the rock ‘n’ roll record I’ve been wanting to make for a long time.”

RIDE does, indeed, rock…Broadbent’s natural grit, voice and guitar, riding atop every song

with a driving force. There us a great deal of stylistic diversity here — from the moody

ambience of Who Are You? and the title track, which he calls “a tale of adventure”, to the

blues roots of New Orleans, a love letter to one of his favorite towns. Grace soars with a kind

of front-porch spirituality, while “I Love Your Rock ‘n’ Roll”, is as Broadbent explains, “…an

homage to the bands that I like” and boasts an energetic Americana lope. Even though there

are several twists and turns, the album takes the listener on a trip, strung together by a vision

that Broadbent developed during the recording process.

“Mark and I recorded the tracks live in a small home studio in Quebec, Canada. I then sent

for mixing and mastering, ” explains Broadbent. Working around travel limitations and within

the uncertainty of the last year, this international collaboration translates that edge.

Throughout RIDE, one can detect what Broadbent calls “this underlying theme of trying to get

The next step, of course, is to take RIDE on the road, which Broadbent will be doing

throughout 2022. He knows the songs will only grow as he presents them on stage, but they’ll

continue to speak to the experiences from which they were born. “I really like the energy of

this record,” Broadbent says. “There seems to be an interesting dichotomy between what I

write while I’m touring and what I write when I’m able to sit and think. I think what the album

speaks to is that juxtaposition between the ride and the time spent parked up. It all ties into

the journey of the artist.”

No matter what lies on the road ahead, Broadbent’s fans can rely on his dedication to the

music and to his evolving craft. Little Feat founding member and current US tourmate Bill

“I love his voice. His playing is superb, showing an almost reckless abandon when he gets

revved up. He is performing on the edge, and if he falls, so be it. The pieces will not break.”

Mike Dawes is an English guitarist known for composing, arranging and performing multiple

parts simultaneously on a single guitar. He is hailed as one of the world’s most creative

arrangements, alongside mainstream chart success performing with Justin Hayward of The

Total Guitar Magazine/MusicRadar reader polls and simply needs to be seen to be believed.

His ability to combine the melody, bass, harmony and percussion all seamlessly together with

just one guitar leaves audiences absolutely stunned, both with original music and popular

He is now releasing his first ever live album, ‘Shows and Distancing: Live in the USA’ . The

Shatner’s Pants’ in its live debut. It also features many of Dawes’ viral cover arrangements

with unique versions of ‘One’ by Metallica, John Mayer’s ‘Slow Dancing In A Burning Room’

and Gotye’s ‘Somebody That I Used To Know’.

from the stage, which is something I miss dearly in these strange times. I didn’t want to

release a live record without capturing the live energy of the room, especially at a time where

all we have is recorded music. For that reason, I’ve included the crazy audience moments –

the clap alongs, the laughs, the singing, the banter and all the devices I try to employ to reach

the reluctant drag along at the back of the room! Shows and Distancing is about

togetherness.” He continues, “I hope that the moments captured on this record keep the

appetites of live music fans satisfied. I feel that so many people are missing their live music

fix right now and it is the perfect time to release a live record, even if nothing more than a

thank you to the fans for some wonderful shared memories across the USA, and across the

Shows and Distancing was recorded in 2019 throughout the United States, with a few extras

from the past. The first show was captured just off Central Park in New York City, whilst the

quarantine. The album also features some rare highlights such as Dawes’ duet with Quist on

‘One’, cut at the NAMM Show in Anaheim, CA. Added extras include previously unreleased

songs from Mike’s first ever headline concert in the USA.

Dawes’ previous solo album, ERA, spawned a viral hit with his arrangement of ‘One’ that has

His debut record, What Just Happened?, features a large number of additional video hits with

over 12 million YouTube views for two popular versions of ‘Somebody That I Used To Know’.

He is featured on multiple Justin Hayward live releases including Spirits…Live, which debuted

at #2 on the US Billboard Chart. Dawes also has a strong reputation as an educator, acting as

workshops all over the world, creating apps, publishing degree level literature and more.

In addition to touring with Justin Hayward, Dawes has toured with fingerstyle guitarists such

as Andy McKee and the legendary Tommy Emmanuel. He has also been a prominent part of