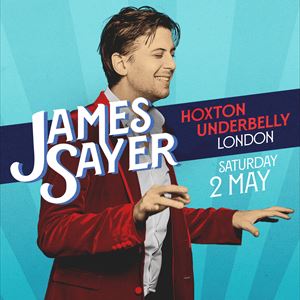 James Sayer
All James Sayer performances
Have tickets to sell? – Find out more

James Sayer returns to London with his band for what expects to be a very special night. After spending the last eighteen months completeing his debut album, 2020 is set to be a big year for James.

“The only thing I love more than being in a studio is being on stage. I can’t wait to bring these songs to life on the road!”. With an adundance of great new music & exciting, passionate and memorable live performances shaping up to bring his songs and sounds to audiences on an international scale.

‘When you hear a track like that, likely inspired by early Van Morrison, my tip to fellow Van fans is to save £100 on the ticket price and go and see James Sayer instead’…..’ I personally haven’t witnessed Van Morrison deliver anything close to that kind of energy and punch on stage in the last thirty years!’  - BBC Radio 6