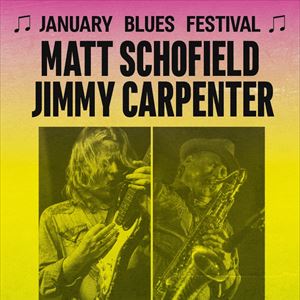 Matt Schofield is a guitar virtuoso and a Blues Hall-of-Famer. He is widely regarded as one of the most innovative guitarists to emerge in generations. Matt has played alongside Buddy Guy and Robben Ford and has released 5 studio albums. Now based in the USA, Matt is returning to the UK to appear at the 2nd January Blues Festival in London.

New Orleans saxophonist Jimmy Carpenter started out in the 1980's with his group The Alka-Phonics. In the 1990's he formed the Blues-Rock group The Believers. Over the years he has performed with Walter 'Wolfman' Washington, Jimmy Thackery, Mike Zito and more. His 2019 LP 'Soul Doctor' has received fantastic reviews.