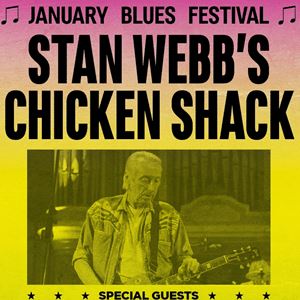 Stan Webb was at the heart of the British Blues Boom as he led his band Chicken Shack around the Blues club circuit in the late 60s. When the band signed for the new Blue Horizon label in 1967, they were called Chicken Shack and consisted of Stan on guitar, Christine McVie on piano (who later played with Fleetwood Mac), drummer Dave Bidwell, and bassist Andy Sylvester, who later played with Foghat.

In 1968, they released their album ’40 Blue Fingers, Freshly Packed and Ready to Serve’, and opened a big tour for labelmates Fleetwood Mac. Their most popular number was a version of ‘I’d Rather Go Blind’, the Etta James standard, sung by Christine McVie. Stan himself had a true Blues sensibility, and an excellent guitar technique, closely modeled on Freddie King.