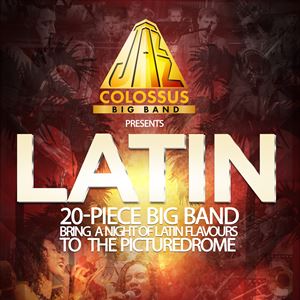 All Jazz Colossus - Latin Night performances
Have tickets to sell? – Find out more

20-piece Big Band Jazz Colossus return to The Picturedrome with a night of Latin flavours, kicking off your weekend in style! The band will be joined by a dazzling array of special guests including Nolita Golding, Alex Wilson, Alejandro Martinez and many more!

Nolita Golding:
With a formidable voice and a charismatic stage presence, Nolita's career has spanned her early years in Tenerife, eight years as a session singer in LA and is currently on the London scene as a vocal recording and performing artist. Nolita was born in Coventry, England and is of mixed Spanish, English and Mexican (Mayan from Yucatán) heritage. Her first break in the salsa world came with the late bandleader, Angel Sabroso who coached her and introduced her to the world of Latin music. Her time in LA saw her working with Duran Duran's Simon Le Bon, Richie Gajate-Garcia, The Henry Mora Orchestra and as a backing vocalist on the Premios Los Nuestro television show. Since moving to London she was immediately snapped up by the salsa scene, performing with the likes of Roberto Pla, Edwin Sanz and the Colombian group Palenke. As ever, the impressive power of Nolita Golding's voice combined with her bilingual skills has her in continuing high demand as the session vocalist who consistently delivers the goods! https://www.nolitagolding.com/

Alex Wilson:
Now based in Switzerland, Alex Wilson is one of the foremost keyboard players to come out of the UK.  He has travelled to sixty countries appearing with artists as diverse as Wynton Marsalis, Rodrigo y Gabriela, Ernest Ranglin, Marc Anthony, Cheo Feliciano, Jocelyn Brown, Courtney Pine, Hugh Masakela, Madou Sidiki Diabaté & DJ Snowboy. His composing & production career is equally diverse writing commissions for Harrogate International Festival, Aldeburgh Music and The Royal Opera House and his theatre score for NITRO’s The Wedding Dance to his TV music placed on Channel 4, the series ‘24’, CNN, Discovery Channel and the Sandra Bullock film The Proposal. Alex Wilson is musical supervisor/director of Do You Speak Djembe - a worldwide interactive show featuring top African and world musicians including Seckou Keita. Curator of the annual London Latin Jazz Fest and with nine solo albums to his name including Mali Latino, which achieved a Top of the World accolade from Songlines magazine, Alex has firmly established himself in the world of Latin Music and beyond. Alex was born in the UK of mixed English/African parentage and was brought up in the UK, Sierra Leone, Austria and Switzerland.

Alejandro Martinez:
Alejandro was born in Colombia and started playing percussion at the age of 9 following in the steps of his father who played trumpet in some of the biggest Afro-Colombian bands from the 60's to the 90's. He moved to London in 1999. His versatility as a multi percussionist has taken him to some of the biggest music festivals around the UK, Europe and Asia. He is currently working on a variety of different projects in Afro-Cuban, Funk and Colombian folkloric music.