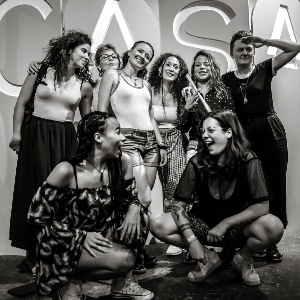 DJ Lubi/Jazzland Sessions are proud to present a night of Afro-Cuban/Latin Jazz/Afro-Fusion music featuring two of the best all-female bands breaking through the glass ceiling in the UK jazz and the Latin music scenes. From London, Afro-Cuban/tropical jazz rising stars Colectiva make their Leeds debut with support from our very own Afro-Fusion jazz queens The Goddess Collective.

Colectiva is a seven-piece ensemble exploring the spaces between Afro-Latin music and jazz while reflecting on themes of sisterhood and female empowerment. Already winners of the "Best Alternative Act" at the 2019 Latin UK Awards (LUKAS Awards), in autumn 2021 they also picked up a Drake YolanDa Award in the best emerging new UK artists category.

Rooted in the sounds of Africa, Latin America and the diaspora, the group’s thoughtful and punchy arrangements are affectionately dubbed ‘jazz tropicaliente’ (hot-tropical-jazz). Released in collaboration with pianist Maria Grapsa, the group’s debut single ‘Under The’ on Movimientos captured the essence of their shared creative practice and received support from the likes of Huey Morgan and Jamz Supernova on BBC Radio 6 Music, Jazz FM’s Chris Philips and Tim Garcia, and Toshiro Matsuura and Papaoul on Worldwide FM.

With more singles and releases planned for the new year, the band are venturing beyond the M25 and up north for the first time. This will be their Leeds debut. If you love Afro-Cuban music, Latin jazz, mambo, salsa and cha cha cha, you need to check Colectiva out.

Support is The Goddess Collective, the 8 piece Leeds all-female Afro-Fusion/Latin jazz band everyone is talking about in the city's buzzing DIY jazz/global beats scene. Only formed in late summer 2021, their autumn shows at Hyde Park Book Club, Hifi Club and Leeds Conservatoire have been a joyful frenzy of great grooves and solos and mad dancing, both from the band onstage and their audiences. They feature some excellent Leeds jazz/global beats musicians already well known in the scene through playing in a host of other bands and they released their debut single in October 2021. The Goddess Collective say that one of their inspirations for forming the band was seeing and reading about Colectiva and their music and philosophy, so opening up for the London band at the Brudenell is a dream gig. Make sure you get down early to catch some Leeds Afro-Fusion jazz fire.