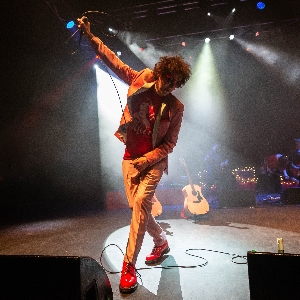 As singer with Carter The Unstoppable Sex Machine Jim Bob had 14 top 40 singles, 4 top ten albums (including a number one), sold over a million records, toured the world and headlined Glastonbury. In 2007, ten years after initially splitting, Carter USM reformed for a series of huge sold out shows until they called it a day again in 2014

Outside of Carter Jim Bob has had a long and varied solo music career. He has released at least ten solo albums (he's lost count). His latest critically acclaimed album, ?Pop Up Jim Bob' was released in August 2020. It reached number 26 in the UK Album chart

Jim Bob has written songs for Ian Dury and for the 2006 Barbican production of Mark Ravenhill's 'Dick Whittington & His Cat'. In August 2010 Jim Bob made his Edinburgh Fringe debut and swansong in the Ward and White musical ?Gutted'

He is currently working on a new album