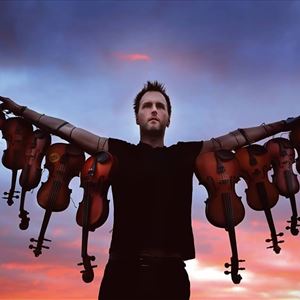 All Jon Boden performances
Have tickets to sell? – Find out more

All shows must be pre-booked and are all seated. We will email you in advance of the show with your table number, arrival slot and a link to an app so that you can order your drinks in advance. This is one of two houses for the night and the show will run for 75 minutes without a break.

Jon Boden has become the ‘stand out performer of his generation’ (The Guardian) of traditional folk artists, but one whose repertoire extends far beyond the boundaries of the genre.

Jon Boden is best known is the lead singer and main arranger of the progressive folk juggernaut Bellowhead.  After twelve years, a quarter of a million album sales, seven singles on the Radio 2 playlist and selling out hundreds of venues throughout the land and beyond, including notably the Royal Albert Hall, Jon announced in 2015 that he wanted to move on.  The rest of the band decided not to continue without him.  Bellowhead played their final gig on May 1st 2016.

As a total contrast to the eleven-piece Bellowhead, autumn 2016 saw Jon launch his live solo career with a performance at Cambridge Folk Festival in July 2016 where he was the festival’s first guest artistic programmer, followed by dates the next week at Snape Proms and Sidmouth FolkWeek.

His recorded solo career goes back to 2006 with the release of his album Painted Lady (re-released with new bonus tracks in October 2016 to mark the album’s tenth anniversary) followed by the critically lauded Songs From The Floodplain which led to him being named Folk Singer of The Year at the 2009 BBC Folk Awards.  He has toured several times since then with his own band The Remnant Kings, but this was the first time he performed entirely solo.

The show incorporated elements from the wide creative span of his career to date – from the self-penned pop songs of Painted Lady, to the funked-up power-pop arrangements of folk songs that characterised Bellowhead and Spiers & Boden, to the post-Apocalyptic song-world of Songs From The Floodplain, to unaccompanied ballads as featured on his mammoth A Folk Song A Day project in which he recorded and released 365 folk songs in one year across 2010-2011.

Widely respected as an interpreter of traditional song, the solo shows also showcased Jon’s instrumental talents on fiddle, guitar and concertina, as well as his trademark ‘stomp box’ which he and John Spiers introduced to the world of traditional music in 2001.  Through his solo work and his work with Bellowhead and Spiers & Boden Jon has won eleven BBC Radio 2 Folk Awards.

Jon’s latest album ‘Afterglow’ was released in October 2017 and continues Jon’s explorations of a post-oil world, this time following the course of two lovers over the night of a fire-lit city carnival.  The first single from the album ‘All The Stars Are Coming Out Tonight’ was playlisted on BBC Radio 2.

‘Alone, Boden still has the energy of a twelve piece band’ EDS Magazine

‘Boden plays a vast variety of instruments as we veer from mysterious love songs to dark, poetic tales, amid hints of soul, electronic and thrilling guitar thrash’ - Mojo **** stars

‘Jon Boden solo is certainly something not to be missed, a variety of instrumentation and song, the dramatic gestures of a rock concert – not something you often get from a solo folk performer’ Americana UK