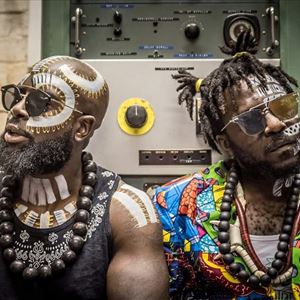 All K.O.G. & The Zongo Brigade performances

DJ Lubi Promotions are proud to bring back one of the UK's top Afro-Fusion bands to Leeds after a gap of almost 3 years. It's their first time at the Brudenell and they're bringing along some mates from Sheffield to warm up the crowd nicely before their explosive live set.

KOG & The Zongo Brigade, led by singer/MC/musician Kweku Of Ghana (KOG), have been making great music now for 7 years and are at the forefront of the UK "Afro-Fusion" scene alongside bands like Nubiyan Twist, Onipa, London Afrobeat Collective. Balimaya Project and Afriquoi. With longtime band member MC/rapper Franz Von alongside Kweku, plus an all-star band featuring top musicians from Leeds bands Tetes De Pois/Mansion Of Snakes/The Fergus Quill Trio/Shaku/Ben Haskins Quartet, they fuse traditional Ghanaian music and instruments with Afro-dancehall, electronica, funk and hip-hop. Whatever you want to call it - Afro-Fusion or Afropunk - it's a joyous explosion of music across frontiers and genres and live, it tears the roof off.

With appearances across the UK and Europe including WOMAD Festival, Glastonbury Festival, Edinburgh Jazz Festival, Reading/Leeds Festival, Shambala Festival, Earth Garden Festival Malta and Millau Jazz Festival France, they launched their debut LP "WAHALA-WAHALA" ("Joy From The Struggle)" on Heavenly Sweetness Records in 2019 and hit the mainland European gig/festival circuit hard before music was shut down by the pandemic in March 2020. KOG and Franz kept busy throughout the 14 months of no gigs with special recording collaborations and live stream events but since mid-May 2021, they're back with live shows for the band including a host of summer festivals leading into a UK tour in November 2021 that includes this much rescheduled and anticipated show. It's been two half and a years since they last appeared in Leeds so it's great to finally have them back. True original masters of UK Afro-Fusion music.

Support comes from some musical mates of Kweku and Franz Von from Sheffield. Breakbeat soul duo Aziza & Finguz featuring Steel City music legend musician/producer Chris Finguz (Bare Knuckle Soul, UKJs, Afropean) and solo artist/singer Jessica Aziza. Over the summer of 2021, they dropped their debut EP "One By One" on new Sheffield label Sounds Like This Records. It's a collection of dark breakbeats/broken beats/drum & bass meets edgy soul/r'n'b vocals and it goes off. Especially live. They rocked stages at Sheffield's Tramlines Festival and Gilles Peterson's We Out Here Festival in August 2021 with their 4 piece live outfit which is heavy on the bass and beats and showcases Aziza's incredibly powerful vocals. Debut show in Leeds so get down early to check out some speaker shaking Steel City breakbeat soul.

DJ Lubi (Jazzland Sessions/RE:SOUL/Club Afro Sound) spinning some great Afro-Fusion sounds past, present and future before, between and after sets.