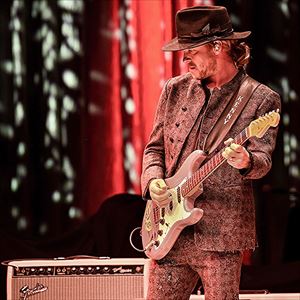 No under 14s in the standing area, 14 - 17s must be accompanied by an adult. No refunds will be given for incorrectly booked tickets.

Kenny Wayne Shepherd has lived more than half of his life in the spotlight. He is widely considered to be one of the best blues/rock guitarists (James Brown once referred to him as 'one of the wonders of the world') and he has had six No. 1 blues albums and a string of No. 1 mainstream rock singles.
The Kenny Wayne Shepherd Band is a veritable who's who in rock and blues. In addition to long-time vocalist Noah Hunt, the band features drummer Chris Layton, a 2014 inductee into the Musicians Hall of Fame as a member of Stevie Ray Vaughan and Double Trouble, completing the band is New Orleans keyboardist Joe Krown and Scott Nelson on Bass who has gigged and recorded with the elite in the blues.

Presented in association with www.thegigcartel.com