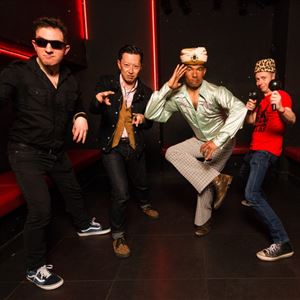 King Salami and The Cumberland Three

All KING SALAMI AND THE CUMBERLAND THREE performances

King Salami and the Cumberland 3 join us from  all corners of the world. The band formed in 2006 and consist of one Japanese punk, a French punk, a Spanish punk and a Caribbean tennis teacher. They were featured on a BBC Four series From Wall To Wall in which Peter Hook, Midge Ure and Jazzie B helped Rhod Gilbert to find the Uks best Part time band. That band were King Salami and the Cumberland 3. The London based band play sows in the Uk  but also  constantly all over Europe, sharing the stage with the Pretty Things, the Trashmen, the Standells, the Mummies, the Bellrays, the Cynics, etc...they have also despoiled the pristine lands of Japan, China, Australia and the US. Their punk R & B has audiences dancing around the world. The Charismatic frontman  and energetic band exude a presence and ownership of the stage that few bands ever attain. Echoes of Link Wray and Dr Feelgood.  Tonight will be one of the best shows ever at hot box and will have a large audience.