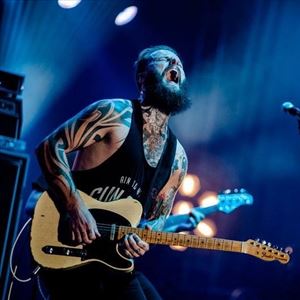 The band were riding a wave of success before the pandemic hit. Now, they are coming out of it like a freight train.

Talking about the upcoming tour, Barras says, "Like most artists, I just can't wait to get back out there and play some shows. I've spent the lockdown period writing and recording a ton of new material, and it's going to be great to play some of this stuff on our headline tour. Venue-wise, this is our biggest tour to date, and anyone that has seen the band previously will know that we never bring less than 110% to every show. After being shut down for so long, I think we will be like caged animals released into the wild! I'm hoping that we should have some new music released by then, too, so keep yourselves posted."

2019's breakout album 'Light It Up' capped a whirlwind three years where they relentlessly toured across the UK and mainland Europe, along the way playing with the likes of Black Stone Cherry, Rich Robinson's of The Black Crowes band The Magpie Salute and Therapy? amongst others, as well as stunning performances at festivals such as Ramblin' Man Fair and Planet Rockstock. Barras played to 3 million people on BBC Radio 2 – which caused host Richard Madeley to exclaim, "that's the reason I love doing this show!" and the band also won the 2019 award for Planet Rock Radio's Best New Band.