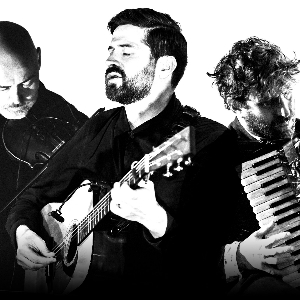 This event was originally due to take place on 4 June 2020, then 6 November 2020 and then 17 June 2021 but has been rescheduled due to Covid-19. Tickets already purchased will remain valid for the current rescheduled date of 23 February 2022. All other event details remain the same.

For the first time in over a decade, Lau present 'Unplugged', an entirely acoustic tour.

Already acknowledged as phenomenal live performers (‘the UK's best live band’ – the Guardian), Lau arrived at a new creative peak with 2019’s Midnight and Closedown (Reveal Records). That album was produced by John Parish (PJ Harvey, This Is The Kit), who said: ‘Lau are in touch with their roots but not bound by them’.

Now 2020’s Unplugged concert tour sees the folk supergroup strip away their banks of electronics, loops and wild effects. The trio of Kris Drever (guitar, vocals), Martin Green (accordion) and Aidan O’Rourke (fiddle) feel drawn to a more raw and plain-speaking aesthetic. The approach is subtler, less about spectacle, more about close listening. In brash and polarised political times, here is the poetry of real instruments and considerate music-making.

'Lau are a remarkable band – the most musically adventurous trio in British folk – exquisite and hypnotic, musicianship at its best’ ***** THE GUARDIAN

‘Quite unlike anything else out there’ ACOUSTIC Magazine