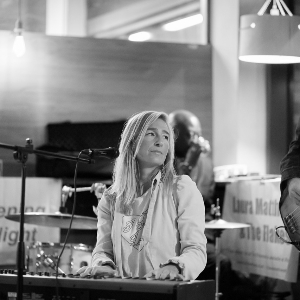 All Laura Matthews & The Flakes performances
Have tickets to sell? – Find out more

Laura Matthews & The Flakes are a unique Country crossover band founded in 2016, who cut their teeth at the Elmwood, London NW10, at their monthly residency they named Lightening The Night. They since recorded their album Live at The Elmwood, available at Rough Trade and online, following Laura’s first Flakeless album Not Again.

Their music comprises rich, strong, piano led ballads, songs dealing with loss and redemption, but they are also tongue in cheek and life affirming in their jaunty crossover style, encompassing the best of a Rock n Roll and Americana spirit. The band’s original material holds its ground well amongst songs by Dylan, Amos Lee, Buddy Holly and Gillian Welch among others

Laura’s vocals are at times pure and bell like and at others almost Joplin-esque. Put her with Steve Fitzgerald on guitar, Chris Jones on bass and Mike McKenzie on drums, and you get a band that is truly ‘cooking’.