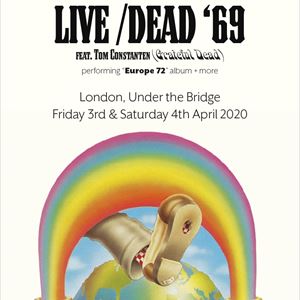 All LIVE DEAD '69 perform "Europe 72' performances
Have tickets to sell? – Find out more

Tom has been inducted into The Rock & Roll Hall of Fame in 1995 and was essential to Grateful Dead’s first 2 experimental studio recordings “Anthem of The Sun” and “Aoxomoxoa.”

Mark is also a regular member in the rotating line-up of Phil Lesh & the Terrapin Family band.

That tear he co-founded KBC, and played lead guitar in Paul Kantner’s Jefferson Starship for 2,000 shows over 30 years, longer than any other musician.

Richard has just recorded Robert Plant’s new single. He also tours with Paul Rodger and played extensively in Jefferson Starship. He was one of Paul Kantner’s all time favorite drummers.

Tony is a multi-instrumentalist who has been a long time member of Jefferson Starship, having appeared with them for throughout the world for 13 years.