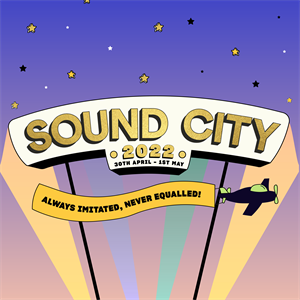 The Lathums Self Esteem Alfie Templeman Yard Act Everyone You Know The Reytons Matilda Mann
The Royston Club Abbie Ozard Bears in Trees Buggs Cody Frost Retro Video Club
All Liverpool Sound City performances
After a euphoric return in October 2021 that set itself apart as the definitive home of vibrant new music no matter the genre and no matter the style, the revered Sound City heads into 2022 for another landmark year - marking its 15th Anniversary across the weekend of 30th April-1st May 2022.

Emerging across the streets of Liverpool back in 2008 as a heralded celebration of new and exciting music, Sound City has become an essential date in the diary for music fans far and wide to come together and discover the sounds of the future. Nestled in a European capital of music culture, its storied alumni who have made those first steps at Sound City reads as a who's who of the biggest and brightest names in modern music (from the likes of Ed Sheeran, Stormzy, The xx, Alt-J and Courtney Barnett to The Wombats, Royal Blood, Catfish & The Bottlemen and many more). Continuing to champion and elevate the sounds that'll come to define the years ahead, Sound City celebrates its 15th Anniversary by doing what it does best. Pointing to the here and now.