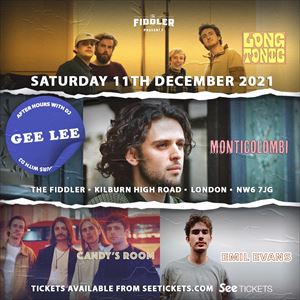 "Knee-bending grooves and gut-busting riffs. Long Tonic are heading to London with their special flavour of gritty funk - guaranteed head-bops and heartbreaks."

Monticolombi is bringing good vibes and powerful positivity for 2021.
His RnB-infused raps over soulful grooves carve a retro 90s style into storylines of modern society. The moniker is inspired by his smooth-talking, suave-striding and incredibly generous grandfather, Carlo Monticolombi, whose positive effect on the world is reflected in the Monticolombi narrative.

After releasing his first single in may of 2020 he has seen substantial support, both from his fans and the industry. On his latest single, 'Praise', he amassed over 30,000 streams in less than month with 12,000 monthly listeners all independently. Previous track, 'Pavement' was also made BBC Introducing Suffolk 'Track Of The Week' by Angelle Joseph.

Primarily known as front man of collective Stretch Soul Gang, he's already accumulated a range of successes under his belt including supporting the likes of Jam Baxter, The Brand New Heavies, Norman Jay (M.B.E) & Calibro 35 having played stages such as the 02 arena Greenwich, BoomTown & Under The Bridge.

Candy's Room are making darkly romantic city songs with a fragrance of the surreal. The passion of soul music meets the urgency of punk in a psychedelic, noisy delirium.

The South-West Londoner, Emil Evans, is a blend of 70s inspired funk and soul with a modern twist.