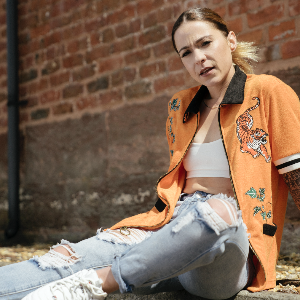 The singer-songwriter has now had 4 top 40 albums and last year sold over 30,000 tickets across her UK and European tours.

She also toured the US and Canada for the first time as a headline artist, winning fans all over both countries.

Her last album "I Hope You Don’t Mind Me Writing" charted at number 12 in the Official UK Album Chart, the second album released under her own label - CTRL Records and was described as ‘a triumph’ by the UK press.

Over the last few years, as well as her sold out headline tours, Lucy also performed at some of the UK’s biggest festivals, including Glastonbury and Isle of Wight Festival.

Recognized as one of the leading lights in the LGBT community, Spraggan has managed to broaden her fanbase into a much wider market recently.

Lucy’s music-writing career began with Don Maclean and Kirsty MacColl as her major influences, embellished with the folk narratives of Peter, Paul and Mary, and taking on the punchy riffs of traditional R and B.

Her name is now synonymous to the melodic middle ground where pop and acoustic folk meet. The toe-tapping interpretations of classic sounds and the harmony-heavy ballads that she pulls from modern rhythm and blues, are hard to forget. Spraggan’s trademark sound is the rattle of rap dropped into sing-along folk-style numbers.