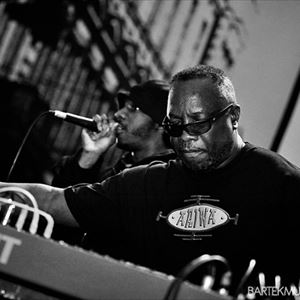 Fan-to-Fan Resale Tickets
Global Beats Presents:
Mad Professor Live Dub Show
Support by Sir Coxsone Outernational Sound with Lloyd Coxsone
Con Club // Lewes
Saturday 29th February
Doors 7.30pm - 12am
He might be called MAD PROFESSOR, but he is one of the sanest working musicians around. In his long and accomplished career, this globally acclaimed dub talent has amassed a fine discography that includes many cult albums. He has also worked with the likes of Johnny Clarke and Mikey Dread, Reggae Regular and Ruts DC, all of whom are legends in their own right. Right back in the 80s did Mad Professor build his own first mixing desk and he soon began working with the Ariwa Studio and label on a 12 part album series Dub Me Crazy. With new instalments coming each year, they helped establish the Londoner as a real master of the mix, of echo and reverb, of spacious rhythms and dub attitude.
His crazy use of sound effects and clarity of mixing won him many fans and plaudits, and remixes of acts like The Orb, Beats International, Sade and 400 Blows all followed. And of course so did live shows, which took the Mad Professor to high profile gigs all over North America, Europe, Japan and many places in between. High profile remix work on Massive Attack’s seminal Protection album helped elevate him yet further, and the new century brought with it many more big releases for his Ariwa label, which eventually went on to distribute more than 200 releases in all. Still in demand for shows and studio work, Mad Professor plays cult events like Unsound and Outlook Festival in Croatia and works with the likes of Lee Scratch Perry, U Roy, BigYouth and many more on his ever excellent label.
The legendary UK soundman & record producer, LLOYD COXSONE, began his career in the sixties, soon after arriving from Jamaica. He was one of the first soundmen to play at West End clubs like Tiles and the Roaring Twenties, where a generation of British pop stars like the Beatles, Rolling Stones and Elton John first heard the music of Jamaica. Coxsone then dominated the seventies, when Bob Marley and Dennis Brown were among his closest allies, as heard on unforgettable dub-plates from that era. Lloyd is an elder statesman with more than fifty years’ history behind him, but he knows there’s still a place in the music for those who are young at heart and willing to embrace change.