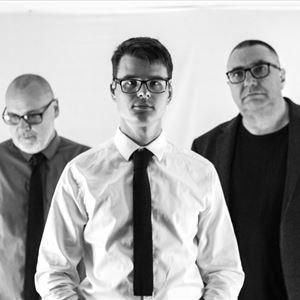 Founder members Richard Talbot and Jamie Crossley with Duncan Meadows who joined in 2012 have steadily developed and refined a unique musical identity, evoking emotions from gracefully blending elements of dub, jazz, ambience and electronica within their richly melodic compositions.

Marconi Union fit somewhere between artists such as Kraftwerk, Biosphere and Boards of Canada - whilst at the same time having their own distinct sound.

Marconi Union have released 10 critically acclaimed albums and worked with many other artists including Jah Wobble, Max Richter, Biosphere, Steve Jansen and Marina Ambramovich Institute. As writers of what is claimed by academics and others to be 'the most relaxing track in the world'  Marconi Union have amassed tens of millions of downloads and streams. They regularly top the US Billboard New Age chart and frequently appear in the US Billboard Electronic chart.
At Capstone theatre Marconi Union's live AV show will utilize the venue's superb facilities. Marconi Union will play material from their new album Dead Air (Just Music) alongside unreleased tracks and music from their extensive back catalog.  Visuals to accompany each track are provided by Art Collective DOTCA.
“Minimal, introspective, ethereal electronica – gorgeous” – The Guardian.