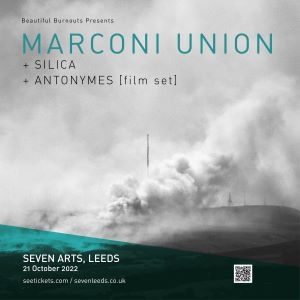 THIS EVENT IS ALL SEATED

Despite having released twelve albums in the last eighteen years the Trio continue to experiment and push boundaries.

The band set to writing Signals with a whole new swathe of influences: “We talked about what it'd be like to have drummers like Jaki Leibezeit or Tony Allen playing on our music. How would that affect how we wrote?” Alongside other influences from Jazz, Krautrock and Electronica, Signals enters exciting new territory.

Marconi Union fit somewhere between artists such as Kraftwerk, Biosphere and Boards of Canada - whilst at the same time having their own distinct sound. They are best known for Weightless which has being described by academics and others as ‘the most relaxing piece of music ever made’. It has over 200 million Spotify plays and 120 million YouTube streams. Amongst many others they have been asked to remix the likes of Max Richter and Vök and in turn have been remixed by Biosphere and Steve Jansen (Japan). The have worked with Italian Jazz Trumpeter Giorgio Li Calzi and many other notable collaborations.

Silica is a Leeds based collaboration between artist Griet Beyaert and guitarist Ben Lewis (a.k.a. UFO Club). Combining the digitally manipulated sounds of
Griet’s custom-made glass percussion with Ben’s genre-fluid, free form improvisation, Silica have crafted a sound that is completely their own. Untethered from the linear boundaries of traditional music, they are able to focus on weaving complex layers of spacious sound textures in free time. With the recent addition of field recordings and vocal samples to this basic structure, Silica have demonstrated that they are a project that rarely stays fixed in one place, evolving with each performance in what has become a process of continuous experimentation.

Antonymes is the moniker of Ian M. Hazeldine a musician, film maker, photographer and graphic designer who makes music, film and images at the edge of, and deep inside, and from above North Wales.