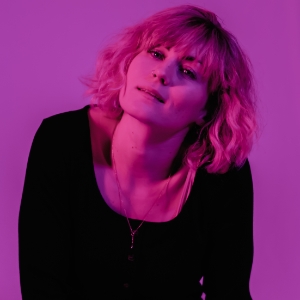 Irish born singer - songwriter Megan O’Neill has just released her fourth studio record, 'Getting Comfortable with Uncertainty'. This much anticipated album follows her last release, ‘Ghost of You’ (June 2018) which hit #1 on the iTunes singer/songwriter charts in the UK and Ireland.

Most recently her cover of ’Time In A Bottle’ featured on the Netflix No.1 show Firefly Lane. She also appeared on the RTE Late Late Show to perform her stunning version.

To date Megan has toured the UK, Ireland, US and Germany. She has performed at private Oscars’ parties in LA alongside Gavin James (on invite from JJ Abrams) and has had her song ‘Don’t You’ featured on ABC’s hit TV Show ‘Nashville’ (Season 3). In 2019 Megan opened three stadium shows for the legendary Sir Tom Jones (Bristol, Taunton and Colchester) - performing in front of 15,000 people per night. In the first few months of 2020, Megan opened for Lighthouse Family at the Olympia Theatre, Dublin and Jamie Cullum at the Bord Gáis Energy Theatre.

Prior to her album ‘Ghost of You’; Megan released two EP’s: ‘Coming Home’ (2015) - produced by Philip Magee (The Script, Kodaline) and ‘Stories to Tell’ (2017) - produced by Guy Fletcher (Dire Straits, Mark Knopfler). She also released a single under Decca Records in collaboration with Ben Earle (The Shires) - ‘Can’t Put a Price on That’ (2016).

Megan has been deemed “one of the rising stars” of UK Original Alt-Country / Americana Music by uDiscover (2018) and Timeout Magazine London. In 2018, she performed at every UK Country Music Festival including Country-2-Country (at the 02, London), Black Deer Festival, The Long Road Festival and Nashville Meets London’s series of events.

In 2019, Megan took the main stage at the British Country Music Festival, toured with Sir Tom Jones across the UK, released 2 brand new singles and performed as the lead female in a very exciting new project with Universal Music – ‘Now That’s What I Call Country Music The Roadshow’. Megan also spent 2019 finishing her next album with The Dunwells (titled ‘Getting Comfortable with Uncertainty’). This forthcoming 12-track album has already received attention from the sync world, with one track off the album having already been selected for placement in a major Netflix series, airing this year.

2020 is off to an incredible start with Megan signing on with Phyllis Belezos at ITB Agency for booking and Willie Ryan as her legal representative. Megan had a full year of touring planned across the UK, Ireland, Germany, NZ and Australia – all of which has now been cancelled due to Covid-19. However, Megan is still planning on releasing new music throughout the year and performing online shows throughout the current Covid-19 situation.

In the past few weeks, Megan released a new song (Ireland) which has exploded to over 300,000 views on social media and been shared by major media outlets including Joe.ie, Her.ie, Image Magazine, Irish TV and more. The video was also picked up and shared by none other than Olivia Newton-John as well as being added to the RTE Radio 1 playlist for two weeks running. The song officially hit streaming platforms on 15th May.