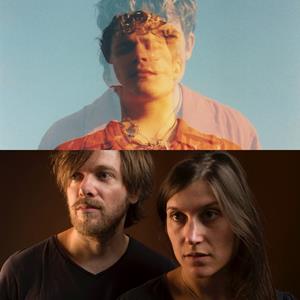 Greenness is the musical project of French singer-songwriter Cess Frangi and English producer and composer Graham Pratt. Drawing inspiration from hybrid genres, such as trip-hop and folktronica, the music of Greenness aims to create an immersive and emotional experience through the use of various acoustic instruments merged with beats, sound effects, field recordings and evocative bilingual lyrics, in a bid to explore and deepen our connection with ourselves, each other and the environment.

Based in Brighton since 2013, the pair has performed in some of the city's biggest venues (Brighton Centre, Concorde 2...), opened at a sold-out event in London's iconic Royal Albert Hall and toured across the UK, France, Spain and Germany, equally at ease with a full backing band on festival stages or in smaller settings with their more intimate, stripped-back duo set. Notable performances include supporting US folk artists Marissa Nadler and Handmade Moments, opening for UK top 10 rock band The Slow Readers Club and sharing a stage with the likes of Alice Russell, Orbital, Dub Pistols and Asian Dub Foundation. Following the successful launch of two thematic EPs ( Bicephaly in 2016 and Cyclicity in 2018), Greenness are now working on their debut album Sunrooms set to be released independently this year.

Over the last year his intimate, psych-tinged folk songs have become a staple of the Brighton live scene where he has been seen supporting the likes of Oracle Sisters and Albertine Sarges amongst others.

Educated by classical music and informed by multiple genres, from country to psychedelia, Lando has carved out his own form of creamy lo-fi folky goodness. Lando's debut EP ?Hip Shot' was released on cassette on his own imprint Mano Wax Records in March and will be available to purchase at the merch table.

'The fact the artist can conjure up such a range of sentiment within their arrangement, that's a truly impressive skill.' - Circuit Sweet