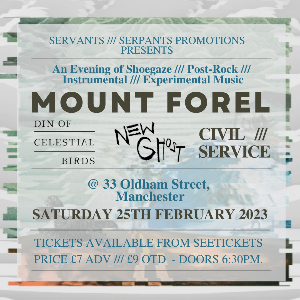 Mount Forel head to Manchester in support of their album Sub Rosa Stories.

Mount Forel are the soundtrack to your lucid dreams.

The melodies whisper like common copper butterflies resting on a dwarf birch.
Be drawn in and comforted by the forest sunlight only to be suddenly left on the edge of a cliff, naked somehow, wondering how you are going to get home.
There you see a
gentle giant
troll breathing deeply as they run up and down the mountains, overhead you hear
layered guitars soar on winds above the peaks in
Sermersuuq as toms and cymbals rain from the sky, crashing to the ground. They sound like a live house in Tokyo. Like a Mancunian computer. Like a fjord. Like a log cabin in Colorado.

Wake up. Listen to Mount Forel.

Din of Celestial Birds - a Leeds-based instrumental post-rock band, whose debut EP 'EP1' established the band as ones to watch in 2019. In 2023 the band have their sights firmly set on big things - and this Manchester show should be no departure from the same.

New Ghost - Sheffield 5-piece band dabbling in Rock, Dreampop, Shoegaze and all things alternative join the bill following BBC introducing Sheffield spinning their tracks on numerous occassions and Noizze.co.uk listing their EP as one of their top 20 EPs of 2022.

Civil Service - Manchester's premier frenetic post-rock band follow up a strong showing in 2022, following up their debut EP 'Life///Death' with a series of live videos from across the country supporting the likes of And So I Watch You From Afar, The Dear Hunter, Redwood, Giant Walker, Codicies, Mountainscape, Poly-Math, L.O.E. and many more, showcasing what promises to be a hard-hitting debut record.