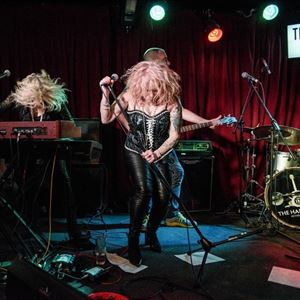 All Never The Bride performances
Have tickets to sell? – Find out more
Fan-to-Fan Resale Tickets

In the very heart of the notorious London rock and roll scene exists a whirlwind duo of female energy and ecstasy, please meet Never The Bride.

Their live performance is to be held in awe, purely in anticipation of the live operatic architecture they consistently unfurl upon their willing audiences. Having invaded venues ranging from The Royal Albert Hall (on multiple occasions), playing alongside Elton John at the Royal Albert Hall, Touring UK & Australia with The British Symphony Rock Symphony alongside, Roger Daltrey & Paul Rogers, Wembley Arena supporting The Who, Glastonbury Festival with Dame Shirley Bassey, Birmingham NEC duetting with Bryan Adams, Various with Eric Clapton, The Viper Room in LA and Euro-fests galore - to intimate spaces like The Green Note in Camden, Never The Bride have amazed and floored audiences and peer groups alike over their 25 years of service – these ladies are true rock and roll royalty.

Roger Daltrey broadcast “Nikki Lamborn has the best female rock voice since Janis Joplin and I know what I’m talking about, I knew Janis”.

The legendary Dame Shirley Bassey called the girls “inspirational", and, on hearing Nikki sing their original song The Living Tree said, “I got goosebumps and the hairs on the back of my neck stood up”. Dame Shirley went on to record The Living Tree with the girls which then led to the Dame's Chart Topping Album “Get the Party Started”, which the girls also produced.

They have performed shows for Cher, Ruiz Bernard Picasso, The Kennedys..and more. Liza Minelli came to their show in New York and even sang a few lines with Nikki.

Bob Harris from BBC Radio 2 referred to them as “one of the best live bands in Britain”; the ladies’ roll-call list is simply mind blowing – as are the stories the ladies readily share.

Bristol born Nikki Lamborn carries the dynamo vocal lead, while Glaswegian, Catherine ‘Been’ Feeney asserts the ‘sonic art’ with keys and vocals.  Joined by a world class band their raw, unfettered talent is undeniable and is enough to justify the impression the girls have left on audiences throughout Never The Bride’s 25 years of global domination.

Nikki also holds a successful reputation as a vocal coach; described as “the best I have ever known” by Beverley Knight and has appeared on TV as a vocal coach on BBC’s “Just The Two Of Us” and Channel 4’s “Faking It” series as well as recently taking part as a judge in BBC1s new Saturday night Prime time entertainment show "All together Now”.

Their last album Long Live Live was recorded at The Stables Theatre, Milton Keynes, UK and introduced personally by BBC DJ Bob Harris, who said of the band, “I first start playing them on the radio Mid Nineties at GLR, (Greater London Radio). We became firm friends then and I was absolutely struck by their brilliant musicianship, their passion, their commitment, they really really mean it...They are one of the best live bands in Britain today.”

Never The Bride have released seven studio albums to date, with their latest outing, due to be released in March 2019.