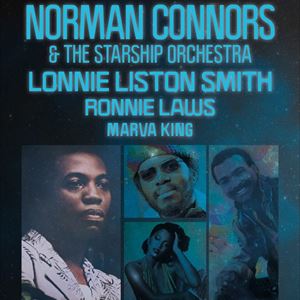 All Norman Connors & The Starship Orchestra performances
Have tickets to sell? – Find out more

An explosive line up of Jazz-Funk & Soul legends are coming to London's Indigo at the o2 for a European exclusive date.

Norman Connors and the Starship Orchestra top the bill and will be performing songs from their illustrious back catalogue including "You Are My Starship", "Captain Connors", "Valentine Love", "Once I've Been There", "Mother of the Future", "The Creator Has a Master Plan", "Phoenix", "Mr. C", "Samba for Maria", "Stella" and more.

Lonnie Liston Smith and the Cosmic Echoes formed in 1973 after Lonnie Liston Smith had been working with Miles Davis, Pharoah Sanders, Rahsaan Roland Kirk and more. They will be performing gems such as "Expansions", "Space Princess", "A Chance For Peace", "Cosmic Funk", "Astral Travelling" and more.

Ronnie Laws released his debut album "Pressure Sensitive" in 1975 after leaving Earth, Wind & Fire. The lead track from this album "Always There" is his most enduring hit which has been covered by Side Effect in 1976 and became a #5 in the UK for Incognito & Jocelyn Brown. Ronnie Laws has worked with Ramsey Lewis, Gregory Porter, George Duke, Quincy Jones and more.

Marva King released her debut album 'Feels Right' in 1981 and songs from the LP "Who's Right, Who's Wrong", "Feels Right", "Do You Want To Make Love" have become Rare-Groove Anthems. Marva went on to be a member of Prince and the New Power Generation and more recently had a starring role in the Tyler Perry film 'Diary of a Mad Black Woman'.

Transport information for Indigo2, At the O2