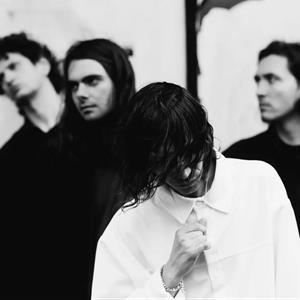 Following the success of their debut album Forever Whatever, released at the start of 2020 and with a solid foundation built over years of touring and writing, October Drift affirmed their place as an important new presence, with their heavy, pop-inflected rock delivering a rejuvenating injection of fresh blood to the genre. The album was met with widespread critical acclaim on release, garnering praise from the likes of CLASH, Kerrang! Louder Than War and many more. ? The forthcoming album I Don’t Belong Anywhere is out September 23rd via Physical Education Recordings.? Having already thrilled audiences at festivals including Glastonbury’s John Peel Stage, Reading & Leeds and The Great Escape, as well as on a major European tour with Editors and a slot at Liverpool’s Sound City, Forever Whatever, The Naked EP and the forthcoming album I Don’t Belong Anywhere together condense years of relentless touring and expertly crafted performance into showcases of flawless songwriting; statements of intent from a band more than ready to cement their place as future icons.

An immersive wall of distortion envelopes the powerful fragility of frontman Kiran Roy's vocals, while he paints a verbal landscape of introspection, despair and hope amid a sonic palette that evokes both the driving, spacious absorptivity of My Bloody Valentine and the poetic, visceral honesty of Nick Cave's lyricism.