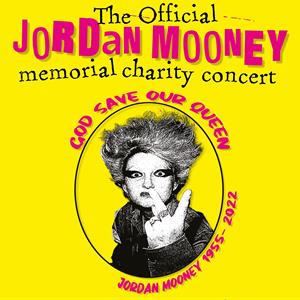 This is the Official Memorial Charity Concert for 'The Queen Of Punk Rock' Jordan Mooney, who sadly is no longer with us in person. Her legacy in the music and fashion world will last for many generations to come. Jordan had the 'punk look' before punk existed! She was there at the inception of the Sex Pistols and then went on to become Adam & The Ants first manager.

Jordan was an inspiration to countless numbers down the decades and an advocate for many new up-and-coming bands, as well as for her punk friends in the more established acts. This memorial concert reflects this and will feature live sets from The Monochrome Set, Gaye Bykers On Acid, Johnny Moped, Spizzenergi, DITZ, Bootleg Blondie, AK/DK, The Pink Diamond Revue, Monakis, and Fruity Water.

True to Jordan's punk ethics, all of the artists appearing will be treated on an even basis. Therefore the bands will be appearing live in an order that you would not anticipate, so it is advised to arrive early!
There will be DJ sets consisting of tunes that Jordan loved in between live performances and other happenings, such as slide shows throughout the event. Food including vegan options are available on site as well as drinks.

This is an all day and evening charity concert with the proceeds from ticket sales going to Cats Protection and the Music Venue Trust. Free 'Limited Edition' Program - First come first serve.