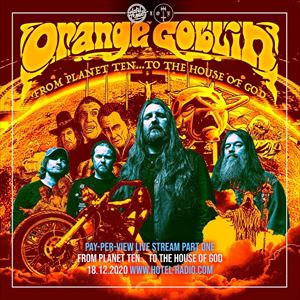 All Orange Goblin - Live in Lockdown - Day One performances
Have tickets to sell? – Find out more
TICKET DETAILS:
- Tickets are sold in groups of 2, 4 or 6 only.  Each group must come from the same household.
Unfortunately there are no single tickets avail.
First in = best dressed, i.e. you can select your group of seats on arrival, in accordance with your ticket.

SHOWDAY DETAILS:
- Venue doors will be open for 60mins before the performance, due to the numbers and COVID guidelines we may need to stagger peoples entry in to the venue.  Please keep an eye on the facebook event page for additional information about this.
- During the show you will be required to stay seated, and are asked to keep in mind the safety of those around you by being considerate of personal space

GOODIE BAGS:
- These will be waiting at your table when you arrive and include a limited edition Orange Goblin '25th Anniversary' Beer Koozie, an ice cold can of Brooklyn Lager and whatever other stuff we can find!  You will also have exclusive access to a Q&A with the band, so again, keep an eye on the event for more details!
Fan-to-Fan Resale Tickets

Widely admired as one of the most ludicrously thunderous and entertaining live bands on the planet, Orange Goblin have paid their dues and earned the right to be regarded as a heavy metal institution.

Playing across two nights of retrospective material; Show One will see OFGB’ pound through their early years, playing tracks from their first five albums from the Rise Above Records Era... “From Planet Ten... To The House of God!”

Whilst Show Two will feature material from the band’s ferocious latter years with everything from the post-Rise Above era; “They Come Back... The Filthy and The Damned!”