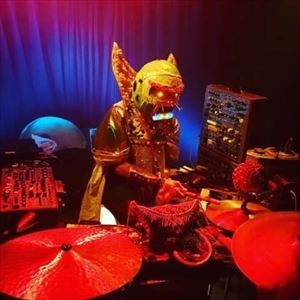 Paddy Steer
All Paddy Steer performances
Have tickets to sell? – Find out more

Fan-to-Fan Resale Tickets
Manchester's magician of analogue electronics, 21st-century Moondog and king of space jazz touches down in The Brickyard this February!
“sounds like a Swiss cuckoo clock made of egg boxes and horsehair, glued together by an African Moog player in a Vietnamese iron monger’s shop” - Graham Massey (808 State)
A highly versatile and anarchically intrepid creator, Paddy Steer's live performances err more daringly and admirably on the frontier of chaotic abstraction, in a madcap joyride through lounge, romp, deep groove and furry electronic invention.
As a live entity he's playful, visually arresting and gleefully infectious, as from behind his stacked array of instruments he gargles through a vocoder with his xylophone, all a-clatter under disco lights and doilies. It feels akin to playing and winning a computer game made from reality, to hear. He will do things to your brain!
FFO William Onyeabor / Sun Ra / The Real Mighty Boosh
www.paddysteer.com