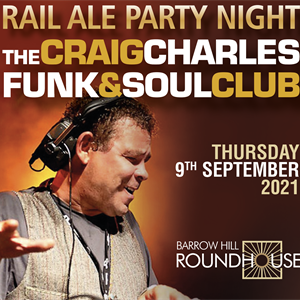 The return of the Rail Ale Festival after an enforced 18 month break will be celebrated in style on the evening of 9th September 2021 when Barrow Hill Roundhouse near Chesterfield welcomes the one and only Craig Charles Funk & Soul Club. The legendary actor, host and broadcaster is one of the UK's most popular funk and soul DJs.

Craig has captivated crowds throughout the UK. The Maestro of Funk has played at numerous festivals, probably the most famous being when he played to over 10,000 people at the world famous Arcadia and Shangri-La stage at Glastonbury in 2016 and 2019. And now he's coming to the Roundhouse - for one night only - on Thursday 9th September so get your tickets now!

Visitors to this one-off concert will also have access to all the Rail Ale bars serving over 350 different beers, a great range of ciders and craft beers as well as the incredibly popular Rail Ale Gin Palace and the Wine & Prosecco Bar.

More detailed information about The Craig Charles Funk & Soul Club appearance at Rail Ale 2021 can be found at www.railalefestival.com.