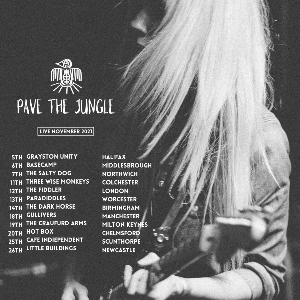 Entrenched around guitarist/singer Rachael Whittle’s swaggering, off-kilter yet decidedly arena-sized compositions, Pave The Jungle formed in the English city of Newcastle in early 2019.

With the addition of long-term collaborator Scott Jeffery (drums) the duo was completed by May of that year.

Over the ensuing summer, the pair bounced between rehearsals and nearby Blank Studios (Pigsx7, Richard Dawson, Du Blonde); and by years-end were in possession of a blistering 6-track mission statement in ‘The Hissing’ EP.

Predictably, momentum stalled with the ushering in of the first UK Covid-19 lockdown. And just days after a feverishly well-received opening slot for Texan alt rock heavyweights ‘...And You Will Know Us By The Trail Of Dead’ - only the band’s third live appearance.

A follow-up arrived in the shape of self-produced, standalone single 'All You Know' in March '21, and one month later The Hissing received its first physical release via Du Blonde's new label 'Daemon T.V.'..

"A pop sensibility under layers of expansive guitar. Think The Big Moon going through a Siouxsie phase." - DIY

“Quite frankly, it’s one of the most exciting EPs of the year.” - Punktastic

"There is no compromising their power and its dense alternative armour proves beautifully destructive." - Podcart