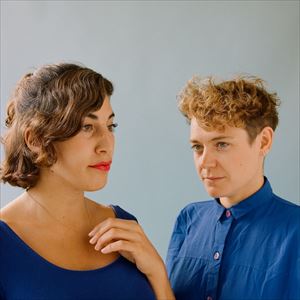 All Peggy Sue performances
Have tickets to sell? – Find out more

Peggy Sue are London-via-Brighton indie duo Rosa Slade and Katy Young. Founded in 2007, the band have released three albums on Wichita Recordings, culminating in 2014's critically acclaimed 'Choir Of Echoes', and toured with the likes of Jack White, Local Natives and First Aid Kit. After a three year break - during which Slade and Young have been performing with all-female singing group Deep Throat Choir - new single 'Slow Fade' is an apt comeback – a melancholy celebration of patience.

Upcoming fourth album 'Vices' sees the band borrowing from the perfectly-constructed pop songs of the 1960s and the understated, noisey guitar experiments of 90s indie bands such as The Breeders and Blur.