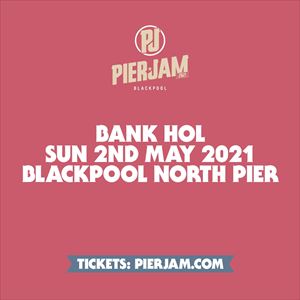 All PierJam 2020 Opening Party performances
Have tickets to sell? – Find out more

The North West’s favourite series of daytime parties, PierJam have just announced their hotly anticipated return to Blackpool’s North Pier, and the date for your diary is Bank Holiday Sunday 2nd May 2021.

Fans can expect organisers to be pulling out all of the stops for their eagerly awaited return including a stacked up line up for the first of their 2021 events. Drum & Bass legends Chase & Status (DJ Set) will be kicking off the first of their 2021 events in May alongside PierJam firm favourite DJ EZ,  king of bass music Holy Goof, Crucast’s very own Skepsis as well as Garage legends Wookie, Wideboys, Oxide & Neutrino, Pied Piper & MC DT and a whole load more.

Set across two outdoor stages and 2 indoor arenas of the stunning setting of Blackpool North Pier, the 2021 opening extravaganza of the iconic day time party will see chart-topping electronic music legends, Chase & Status heading up a host of the hottest talents with a killer DJ set. Responsible for tracks such as ‘Blind Faith’ and ‘Time’ - both of which shot up the UK top 40 charts - there is no doubt PierJammers will be going wild for them at PierJam’s return to the iconic seaside venue.

Widely regarded as one of the best DJs to grace planet earth, PierJam are pleased to be bringing DJ EZ to head up the first instalment of the 2021 summer season. Saluted by the industry for being one of the most creative mixers with instinct and technical prowess, not forgetting the mentions of owning one of the quickest fingers in the trade with his trademark cue action displays during his sets, his distinctive sound and powerhouse sets always go down a treat with the crowd.

Next up, Holy Goof who is best known for his high energy sets featuring a fluid, bassline hybrid sound that is guaranteed to have the whole Pier bouncing. With tracks such as ‘Back Again’ and his massive remix of A$AP Fergs ‘Redlight’ under his belt, he is ever growing and has spent the last 12 months very much in the limelight of the Bass Music world. We are very excited to see him take to the decks at PierJam.

Special guest Bass Music don Skepsis will be taking to the decks on Bank HOliday Sunday 2nd May. Often touring with his label CruCast and fellow bass DJs such as Darkzy and TS7,  his sets are filled with the naughtiest of drops and the heaviest of basslines that are sure to have the crowd going crazy.

It’ll be all things Garage on the Terrace stage with none other than one of the founding fathers of UK Garage, Wookie taking the helm alongside the Wideboys Duo, Chart topping DJ & MC Oxide & Neutrino and fans will be loving it loving it loving it when DJ Pied Piper and MC DT take to the stage.

Bank Holiday Sunday 2nd May 2021 will be the first event to be held back at the iconic coastal venue since 2019, after all planned 2020 events were unable to go ahead. Organisers, performers and fans alike have all been eager to get back to the stunning seaside location and rest assured PierJam will be returning to the North Pier stronger than ever with a whole host of extra surprises for the 2021 summer series.

Tickets for the 2021 opening event will go on sale at 10am on Friday 25th September.