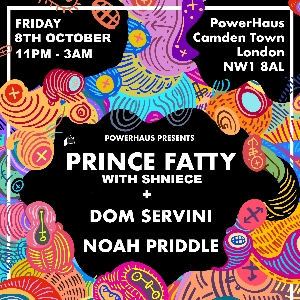 Prince Fatty will be taking over the Powerhaus for a night filled with Reggae, Dub and Dancehall. The British record producer and DJ will be joined by close collaborators, the soulful star vocalist Shniece. Joining them on the night will be Wah Wah 45s label head and veteran DJ Dom Servini who recently released the collaborative EP from Soothsayers & Prince Fatty ‘We Won’t Lose Hope’ as well as remixer and Subtle Radio resident DJ Noah Priddle. Expect to hear plenty of fresh versions and exclusive dubs as well as well known classics from this weighty line up!

Prince Fatty - UK Reggae and Dub legend Prince Fatty is one of the most respected producers in the scene today having worked alongside some of Reggae’s biggest stars Gregory Isaacs, Big Youth, Bunny Lee, Dennis Alcapone, Marcia Griffiths and Luciano to name a few. Prince Fatty became a house hold name after his mega versions of hip-hop and reggae classics were released on albums ‘Survival of the Fattest’ ‘Supersize’ and ‘Prince Fatty meets Versus Drunken Gambler.’ His latest release with Californian artist Stick Figure - ‘Fire and Stone’ reached the US number 1 album spot over taking Bob Marley’s Legend which is a very rare sight! Following on from his last album release ‘In the Vipers Shadow’ 2020 saw a series of EP and single releases featuring long time co workers Horseman and Shniece. Dubplate release ‘Prince Fatty presents Shniece in a Disco Deception’ heard Shniece take on a slew of classics such as ‘You Got What You Wanted’ and ‘Fever,’ the twisted psychedelic cut ‘Black Rabbit,’ a fresh take on Jefferson Airplane’s classic, took the east coast by storm and gospel reggae anthem ‘Brother’ alongside Brazilian sound system MC Monkey Jhayam.

Dom Servini - Dom has been filling dance floors since the early 1990s with his beautifully blended, open minded mix of music steeped in soul, jazz and funk. From the early days of his Brighton residency with DJ Snowboy, his infamous late 90s Mouseorgan club events, to over two decades of DJing under the Wah Wah 45s banner, Dom has become something of a clubbing institution.

Noah Priddle - Beat maker, vinyl lover and Subtle Radio resident DJ, Noah has built a reputation for high quality and wide variety. Able to boast performances at legendary venues likeAlexandra Palace and Ministry of Sound as well as having secured himself inside the festival circuit with shows at major events like Exit Festival, Boomtown, BANGFACE and Bestival.