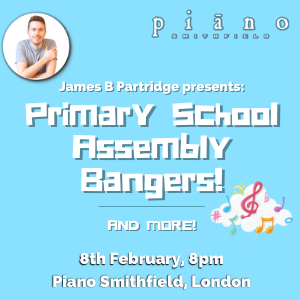 Join James for an evening of pure nostalgia, stepping back in time for some singalong tunes to take you back to your Primary School days. You won’t have to sit cross legged on the school hall floor but you will be encouraged to sing along! As well as the assembly bangers, there will be other musical surprises with Top 10 lists and musical mashups.
James is a singing teacher and regularly performs across the UK and Europe. He has been featured on Loose Women (ITV), Vanessa Feltz show (TalkTV) and The One Show (BBC). His online videos have been written about in The Independent, Buzzfeed and featured in a number of podcasts including education sector podcast “Skills World” and "At Home With...". Radio appearances include: Absolute Radio, BBC 5 Live, BBC Radio Nottingham, BBC Radio Leicester, BBC Radio Lancashire and JackFM.
He has amassed a large social media following based around nostalgic Primary School tunes and music teaching. As a content creator he has partnered with a number of educational and music companies including BBC Proms, Nordoff Robbins, Hal Leonard, TikTok, SMART technologies, Maidwell Marketing and Wicked the Musical.