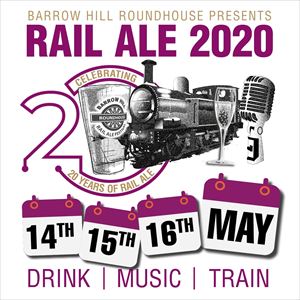 2020 will be the 20th Rail Ale Beer & Music Festival and the Rail Ale team have been hard at work for several months deciding how this land mark event can be well and truly celebrated!

We are delighted to announce a very special guest for the Rail Ale steam train, 'putting the Rail into Ale' which will be hauled by the steam locomotive 'Tornado'. A popular visitor to Barrow Hill for our steam galas, this will be a fantastic opportunity for visitors to get up close to the world famous locomotive, who is more often seen travelling at speed around the national rail network, during the Festival.

And that's not all. On Saturday night we welcome back Sheffield's most famous export after Henderson's Relish and another very special guest for the 20th Rail Ale - The Everly Pregnant Brothers - a power house of parody fuelled on best bitter, pork pies and raucous gigs who brought Rail Ale 2019 to a rip roaring close. Their humour and language is as broad as their lead singer Big Shaun, which is all part of their charm as is the sing-a-long nature of their gigs.

Of course the 'most atmospheric beer and music festival of the year' would not be complete without the 350+ different beers, the great range of ciders and craft beers, the incredibly popular Rail Ale Gin Palace and the Prosecco & Wine Bar, a range of live music in the marquee and on the main stage from jazz and brass through to acoustic, country, funk and soul to rock and roll and a Food Court offering everything from pork pies and pizza to hog roast and pancakes, not forgetting the chocolate, cheese and even coffee and cakes.

More detailed information about this very special 20th Rail Ale Festival can be found at www.railalefestival.com