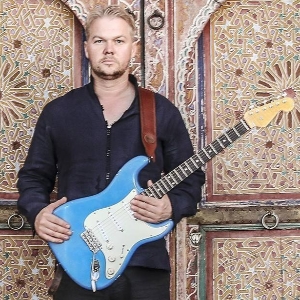 Ramon Goose is one of the most talented and versatile guitarists in the UK. He was very interested in Blues from a young age and the delta Blues guided his formative years. NuBlues was the first Band with Ramon playing guitar. His playing has taken him across America and Europe playing with artist such as Eric Burdon, The Blind Boys of Alabama and Eric Bibb. He has co written and produced albums for critically acclaimed blues artists such as Boo Boo Davis and Billy Jones.

In 2010 Ramon decided to follow the roots of the blues and his search led him back to West Africa. Whilst spending time in Dakar and Senegal he played with many international musicians and made The West African Blues Project. Ramone has co-written albums with many world music heavyweights and formed Ramone Goose and Desert Rock. He is a regular presenter on The Guitar Show, where he shares his encyclopaedic knowledge on techniques, equipment and musical history for a wide variety of musical artists.

Ramon will be arriving with his Coodercaster in one hand and his slide in his back pocket. Support will be added. Join us for an incredible night of Slide Guitar, tickets available now