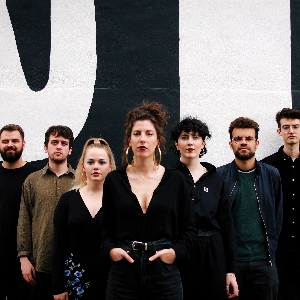 Leeds longtime jazz/soul/global beats boss promoter DJ Lubi hosts nu-soul band Mamilah live for the first time since summer 2021 and their sold out seated show at Brudenell Social Club. This time, the tables and chairs are gone and the band are launching their long-awaited third EP. Support comes from new young rising London/Leeds star of neo-soul/r'n'b, vocalist and songwriter Jasmine Oakley.
Mamilah is a well known and established Leeds-born band, combining elements of neo-soul and old-school soul with the flavours of the recent UK jazz resurgence. Having shared the stage with luminaries such as KOKOROKO, Kool & The Gang, Yazmin Lacey, Galaxians and Craig Charles as well as getting their hands dirty on the local and national gig circuit, they've gigged at Boomtown, El Dorado and Virgo Festival, as well as at top UK grassroots venues such as The Wardrobe and Brudenell in Leeds, Hootannany (London) and Band on The Wall (Manchester).
Their debut EP ‘Moonlight Walking’, independently released in August 2018, quickly followed their first single ‘Sundrips’ and was a catalyst for much of this activity, earning regular airtime on Alan Raw’s BBC Introducing Show in West Yorkshire, being highlighted on his ‘Ones to Watch in 2019’ broadcast, and featured on Bandcamp’s “Best Soul of August 2018” article. Their second EP ‘Talk Less’ was released in May 2020 and received airplay from BBC Introducing In West Yorkshire, Jazz FM, Totally Wired Radio (London), Global Soul Radio and Sounds Like This Radio. EP remixes followed in September 2020, alluding to a more experimental, electronic direction for the band. They have been tipped as ‘ones to watch’ by Love Supreme Festival and were highlighted as one of the pioneering artists in Leeds underground jazz scene by Clash Magazine.
Finally, that long awaited third EP, delayed by the pandemic, will be out in time for the show. Mamilah hometown shows are always special and this time, no tables and chairs so let's dance. .
Support act is rising star of UK neo-soul/r'n'b Jasmine Oakley, who is based in both London and Leeds (currently studying music at Leeds Conservatoire), and her heavy band of you soul/jazz players. After a year of disruption due to the pandemic, she's come back strong since summer 2021 with new music and some lowkey live shows. In 2022, she'll be releasing her debut single in February and doing more live shows leading up to this first appearance at the legendary Brudenell Social Club. Get down early because this singer has a hell of a voice and writes some amazing songs. Definitely one to watch in the UK nu-soul scene in 2022.