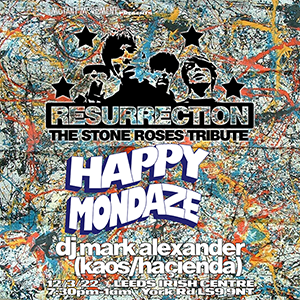 Fan-to-Fan Resale Tickets
Take a trip back to late 80s Madchester with the sound of The Stone Roses, Happy Mondays, indie & acid house from warehouse raves & the Haç!

If you were an indie kid back in the day who liked a bit of acid house, you're gonna be dancing straight thru from 7:30pm til 1am. As well as tributes to the top indie bands of the day, DJs Mark Alexander (original resident KAOS DJ at Leeds Warehouse & guest for Haçienda, Tolerance & Shine) and Mutant Movement will be Givin' You No Rest as the tunes you'd forgotten keep you dancing all night.

RESURRECTION
‘Resurrection’ formed in 1998 & based in Glasgow, Scotland. They have toured with many celebrities including Mani (The Stone Roses/ex Primal Scream) with whom they performed live onstage with, at the world famous King Tut’s Wah Wah Hut, when Mani jumped up on stage to a rapturous applause & performed ‘She Bangs The Drums’ with the lads. The venue erupted & DF Concerts ‘staff’ were quoted as saying “It was the best night we have seen in here for a long time”.

They have toured with Inspiral Carpets members Clint Boon & Tom Hingley & also with Phil Smith (Oasis/Noel Gallagher tour DJ) & have many celebrity fans from bands such as The Stone Roses/Primal Scream/The High/Inspiral Carpets/The Smiths/The Seahorses/Shed 7/808 State/Death In Vegas/ New Order/Freebass & Snow Patrol among others. They performed 2 songs live on BBC Ireland’s ‘The 11th Hour’ music show & STV News showed their live performance from Stockton On Tees with a 10 minute exclusive on the band hosted by music journalist & radio presenter Billy Sloan. They recently did a spot on Sky News to coincide with the release of new Stone Roses material. They have been mentioned in the book about Ian Brown – Already In Me, the updated version of John Robb’s book, simply titled ‘The Stone Roses’ & The Stone Roses book titled ‘War & Peace.’ The publications the band have featured in - include The NME, Melody Maker, Q Magazine (Alex James column – Blur), The Sunday Mail, The Daily Record, The Sun, The Irish Times, The Yorkshire Evening Press, The Evening News, The Big Issue North, Konnect Magazine & so on.

Resurrection have played many sold out shows all over the UK & Ireland to hundreds of thousands of Stone Roses fans, including 6000 at Bowlers Manchester, 1900 Barrowland Glasgow, 6500 at The Point Theatre in Dublin alone & were given this show from none other than Mr ‘Ian Brown’ himself. The band toured for a total of 3yrs alongside Mani, Clint Boon/Tom Hingley & Oasis DJ Phil Smith & had many great nights together on tour. Some quotes from this period in the bands history are mind blowing, with Mani quoted as saying “They do the songs justice & sound better than we did before we split”. The quotes & reviews are astounding from their live performances around the UK & Ireland.

The band reformed in Aug 2014 after a 10+yrs hiatus & sold out over 28 shows in a 12 month period. Their shows continue to sell out around the country.

Resurrection perfect the sound from The Roses records/CD’s & pride themselves on this sound, not the Roses ‘live sound.’ Come along & make your own judgement as we don't suggest to be the UK's best or even the World's best tribute act, as some Roses tribute bands are claiming! We want the fans to make up their own minds & not be misled by claims & suggestions to the contrary.

Quotes:
"They sound better than we did before we split". (Mani) The Stone Roses
“They do the songs justice”. (Mani) The Stone Roses
“They’re still the best tribute to The Stone Roses around”. (Mani) The Stone Roses Dec 2015
"Great bunch of guys, excellent show"! (Chris Helme) The Seahorses
"What a great band, total class". (Rick Witter) Shed 7
“They are a fantastic band & sound like The Stone Roses”. (Clint Boon) Inspiral Carpets
“Such a great band live & they blew me away with just how good they really are”. (Tom Hingley) ex Inspiral Carpets
“They swaggered on to the stage, as the original Roses would have done and tore straight in to a mammoth set filled with all the tunes you’d expect to hear. These lads are the business and by far the closest to the real thing as you’re ever going to get”. (Richard Edwards) Yorkshire Evening Press

FACEBOOK - https://www.facebook.com/resurrectionstonerosestribute
INSTAGRAM - https://www.instagram.com/resurrection_stone_roses/
YOUTUBE - https://www.youtube.com/channel/UCk1IbV4eRDkeFAd9B6JNySg
HAPPY MONDAZE
SPIKE ISLAND - THE RESURRECTION (2021) was probably the best tribute event ever for anyone into indie/dance/madchester back in the day. If you went to the original festival back in 1990, you would have wanted to be there for this. Happy Mondaze put on an uncanny show, paying homage to Shaun, Bez & the lads.
Reliving the heady Madchester vibes of the infamous Hacienda, Happy Mondaze bring you the cult classics and best-selling hits of Manchester’s number one baggy band Happy Mondays.

Never before has a tribute band captured the true essence of the originals with such dedication to re-creating these revolutionary tracks. Guaranteeing a party like no other, the Mondaze promise to transport you back to Manchester’s musical heyday and the birth of rave culture. Sing along with Shaun (Marc), Bez (Peter) and the band to smash hits such as Step On, Kinky Afro, Wrote For Luck and many many more as the Mondaze vow to amaze, entertain and leave you crying out for an encore!

From the dirt of Squirrel and G Man, the attitude of Bummed, slick grooves of Pills n Thrills and the hedonism of Yes Please, the world’s only tribute to the ground breaking sounds of the Mondays brings to you an authenticity like no other tribute band. Billed as ‘spooky’ by Bez, the Mondaze deliver a show that revives and recreates the punk fuelled energy of the late 80s and early 90s rave scene.

FACEBOOK - https://www.facebook.com/HappyMondaze
INSTAGRAM - https://www.instagram.com/happymondaze/
YOUTUBE - https://www.youtube.com/user/TheHappyMondaze
DJs before, between & after bands (Afterparty)
Both Mark (of Mark & Farrar at Kaos) and Gary (of Mutant Movement) have been DJing since the late 80s when the music you're gonna be hard pushed to 'sit down' (no pun intended) for was first getting played.

With a mix of indie/dance and the house music of the day, be it acid, techno, hip house, rave etc. This combination will take you right back over 30 years to the days you probably don't remember too well but there was definitely plenty of 'love spread' around!

Tickets £14.75 +bf via See Tickets, Eventbrite or at the bar, Irish Centre
In the event of this gig being rescheduled or cancelled, the choice of keeping tickets for a future date or a refund would be offered. However, if you require the option to cancel, please purchase Refund Protection at checkout