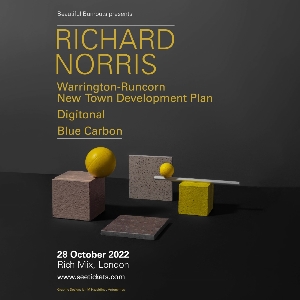 Expect an aural and visual delight.

Richard Norris has an impressive CV: The Grid with Dave Ball (Soft Cell), Wizards Sleeve with DJ Erol Alkan and The Time and Space Machine. Richard has remixed/worked with many artists: Chemical Brothers, Goldfrapp, Joe Strummer, Psychic TV, Robert Fripp and the Pet Shop Boys to name but a few. His current work is a series of warm, electronic deep listening albums, on his own UK based label Group Mind Records. Stunning visuals by Bill Borez.

Warrington-Runcorn New Town Development Plan is the electronic project of Gordon Chapman-Fox. Under the Castles In Space imprint, WRNTDP has released 2 vinyl albums (Interim Report 1979 / People and Industry) to much critical acclaim. They quickly sold out and have been repressed several times. New work is scheduled for release this Autumn. Think "Jean-Michel Jarre meets Vangelis and Boards of Canada with a Brutalist Scarfolk vibe". This will be the first London outing for WRNTDP.

Digitonal Pioneering neo classical / electronica band Digitonal was founded by producer Andy Dobson. Drawing comparisons to Orbital, Philip Glass and Michael Nyman, they have been a mainstay in the UK electronica scene.